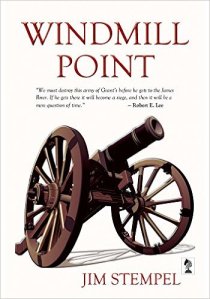 The grit, tragedy and bold strategy of the American Civil War play out in Jim Stempel’s Windmill Point. Am I glad I read it? You bet. Stempel’s writing is vivid and meticulous. He tells the story of the pivotal events that took place in little more than two weeks in such a compelling fashion that even knowing what happens, you still feel the inexorable pull of tension.

But this isn’t a book review, rather Jim Stempel is here to talk about the writing of historical fiction. So, over to you, Jim.

I have written nonfiction, satire, and historical fiction, but when you asked me to write a post for your blog it immediately dawned on me that I had never spent much time (honestly, any time at all) thinking about how I actually go about writing. So first I had to step back and analyze my own approach, and secondly I wanted to be sure that whatever I came up with was not going to waste someone else’s time – as in, thank you Captain Obvious! I say that because I take writing very seriously and, as an extension, I take the efforts of other writers seriously too. I would like to treat every author’s efforts – whether that means a first or twentieth novel – with the same consideration I would like my own work to be treated. But writing is a personal business, we all have our unique approaches, and I know that the way I go about things may or may not be of use to someone else. With that disclaimer now a matter public record, I will suggest a few things that I hope someone might find helpful.

Research: The importance of this aspect of writing historical fiction has been amply documented on your blog before with detailed and excellent lists of elements to consider, but I would go those even one further. To write compelling historical fiction I think you need, not only research a particular time period adequately, but literally immerse yourself in it. I write about the American Civil War, for instance, but I have never technically researched it. I didn’t have to. I have been fascinated with history since I was a kid, and I read and wrote about the Civil War from the time I was in junior high school, through college, and (obviously) beyond. I read hundreds of books on the topic – fiction, nonfiction, memoirs, and biographies – traveled to all the major battlefields, attended lectures, reenactments, etc., and all of this before I had even thought about writing a single line. I would recommend that anyone interested in writing historical fiction choose a time period that fascinates them, then immerse themselves until they feel entirely comfortable calling themselves an authority. Then write.

Character Development: Much has been written about character development, and I have but a few thoughts to add. We come to know people slowly in real life, and I think it best that we come to know them slowly in fiction too. Give the reader a little at a time, with twists and turns that will make the character far more interesting than if the character was entirely divulged at the outset. Also, actions speak far louder than words, so the way a person moves, or sits, or responds to a statement or situation can say far more about a character’s persona than an entire descriptive paragraph.

Less is often more: Likewise, in describing a scene or situation or character there is often a tendency to initially overwhelm readers with details, when less would be far more effective. Pick out the key elements you need to convey then add to those as the scene develops.

Visualization: Lastly, I tend to visualize the scenes I write then jot them down just as a newspaper reporter might describe an actual scene he or she is witnessing. If you are truly familiar with your topic, characters, scenes, etc., this can work wonders. If you don’t like the results, you can back it up and run it over till you get something that you feel is right.

Mary, I hope these few suggestions prove helpful for some of your readers.

Many thanks, Jim. I wish you great success with Windmill Point.

Windmill Point is gripping historical fiction that vividly brings to life two desperate weeks during the spring of 1864, when the resolution of the American Civil War was balanced on a razor’s edge. At the time, both North and South had legitimate reasons to conclude they were very near victory. Ulysses S. Grant firmly believed that Lee’s Army of Northern Virginia was only one great assault away from implosion; Lee knew that the political will in the North to prosecute the war was on the verge of collapse. Stempel masterfully sets the stage for one of the most horrific battles of the Civil War, contrasting the conversations of decision-making generals with chilling accounts of how ordinary soldiers of both armies fared in the mud, the thunder and the bloody fighting on the battlefield.