Back from Paris and I’m pleased to report that I’ve written four chapters of the new novel. The outline is working well as a guide and I can still hold the feeling of Paris in my mind which, along with all the wonderful material I gathered, helps a great deal. 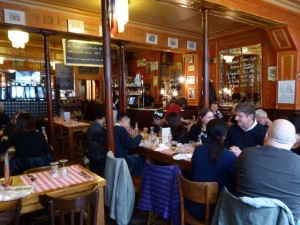 In preparing for our trip, I came across a restaurant called Polidor which has been in operation since 1845 – a perfect place to get a sense for cafe dining in the nineteenth century. Amusingly, the restaurant has a sign posted which reads “Le Polidor n’accepte plus les carts de credit depuis 1845” (The Polidor has not been accepting credit cards since 1845). Cash is the order of the day!

The tables at Polidor are such that you end up sharing space with other diners and since the restaurant was crowded, my husband and I were no exception. The man who joined our table was clearly a regular as he was greeted enthusiastically with a long stream of expressive French, his coat whisked away and a glass of wine appearing almost immediately.

“Bon jour, Monsieur,” I said to be polite.

“Where are you from,” he replied with a British accent. Clearly my French is a dead giveaway that I’m not a native.

We chatted a while about politics, the dampening effect of terrorist attacks, his new career as a playwright (previously a journalist with the New York Times), my writing and a few other subjects. I gave him my card with the thought that he might reciprocate, but he did not.

Two days later, I received an email from him along with a photo he’d taken of a scene during the Paris Commune of 1871. He thought it might be useful for my novel.