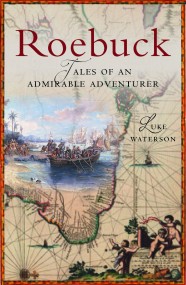 Luke Waterson’s debut novel Roebuck, set in 16th century South America, was published this December. He has also written several non-fiction travel related books and many articles for well-known publications such as BBC Travel, Independent, Telegraph, and The Guardian. Here he answers a few questions on writing historic fiction. Welcome to the blog, Luke.

LW: I recently wrote an article about the obstacles facing writers of historic fiction. As I put it, the genre has a number of known points within which all convincing stories have to move, but sooner or later will come up against gaping gaps (where there is no information about a particular aspect of a period whatsoever). I like the historic fiction which boldly leaps into those gaps, and isn’t afraid to say something just a little bit contentious. For example, Jim Crace’s Quarantine and the re-imagining of Jesus in that book was brave and original. In historic fiction there is also plenty of scope for the telling of the part of the story that has never been told. We writers should be telling it, so that we all die in a little bit less ignorance.

I would put historic novels in a separate category from most other types of novel because we are not writing on a clean slate. We are shining a light on an old slate where there is already some writing (faded and overlooked perhaps, but there nonetheless). That comes with its own specific set of challenges. Imagination can run away unfettered when writing, say, Sci Fi. Not so for historic fiction – the truths we have to incorporate about the past are often inconvenient and to not lend themselves perfectly to the story.

I have always loved to champion the underdog. In historical fiction, for me that means telling the story of someone or something that has previously been overlooked in history. My debut novel Roebuck focuses on maritime exploration of the Americas in the 16th century: but it is told from the perspective of the ordinary sailor rather than that of the officer (who invariably kept accounts of voyages), and from the perspective of the South American tribes people rather than from that of the colonists (via whom much of our knowledge about this period of history has traditionally come). The voices of ‘common people’ or the proletariat – who of course were in many ways absolutely extraordinary – are fascinating to bring alive, perhaps because they may never have had an opportunity to be heard before.

Things are easier with the Internet, I suppose, but far from easy when you consider how little of the world’s information is actually on the Internet. There are warehouses of documents just waiting to be digitalized, for example – that would make the results of your average Google search seem paltry by comparison. But as writers of historic fiction we can only work with what we have been able to gain access to. And I believe our job, when writing on a given subject, is primarily to “know” our subject matter better than the majority of readers. We have to surprise them, thrill them, teach them. And to do that we need to read: around the subject, too, in circles and in more circles after that, from the politics to the fashion to the food people at the time would have had for breakfast. If we know of a page that can be read on the period we are writing about, we should endeavor to read it. I think I had a pile of about thirty books on maritime history, and on life in 16th century England and Brazil, piled around me at any one time during the writing of Roebuck!

Often, it’s the little details that betray a writer of historic fiction: tiny details floating in from a period later than when the book is set. With suspect phrases, most online dictionaries will be able to tell you if there is an outside chance they would have been in common usage in the period or not.

The single most crucial factor is that the reader can start to imagine that particular world. More specifically than that is harder to say as it depends very much on the subject matter. With Roebuck, I was breathing life into a character who did leave behind him some accounts of his life (although not nearly enough!). So in this case it was important to reconstruct a world that was faithful where possible to that original account, and to the information available about the period (the 1590s). Building a strong and distinctive voice for your main character/characters is key, too, as doing this will carry the story. Sometimes this is controversial, because it relies on a degree of interpretation of the available facts. If character X was a sailor and had certain adventures, does it follow that as a character he would be adventurous and reckless? Characters in historic fiction cannot always be totally invented. Creating a character from scratch is one thing. Adapting a character and fleshing them out from dusty document into a person is another – often tougher – thing.

The genre generally is one that seems to be increasingly interesting for readers. Look at Hilary Mantel’s Wolf Hall or Bring Up the Bodies – both Booker Prize winners, both historical novels. In fact, either of the last two Booker Prize winners technically fall within the realms of historic fiction, too. We live in a far more informed society than we used to, and a facet of that is an increased interest in our past – or the pasts of others. I see the job of historic fiction writers as making those pasts easier to engage with and understand. And I think we will see more and more of those minority voices I mentioned – those voices that have never had a chance to be heard before – being heard on the pages of historic novels. At least I would like to see that. Black as well as white, women as well as men, poor as well as wealthy, crippled as well as devastatingly handsome…

Please tell us a little about your debut novel.

Roebuck is a work of historical literary fiction, offering a fascinating insight into the wild world of 16th century maritime exploration.

It follows the true story of Anthony Knivet (based on the account he wrote in 1625 as part of Samuel Purchas’ collection of maritime adventures, Purchas His Pilgrimes). Knivet is an ordinary sailor with extraordinary ambitions aboard the fleet bound on the third intentional circumnavigation of the globe in 1591.

When the fleet reaches the coast of South America, it runs into numerous difficulties, and dark things start to happen.

Anthony Knivet, the protagonist of this novel, gets abandoned on the strange coast of the then fledgling nation of Brazil – a country embroiled in chaos. Portuguese colonists are trying to impose order on their newfound land but a few dozen cannibalistic tribes, as well as Knivet himself, stand in their way.

What follows is a battle – a battle between good and evil, between invaded and invader, but most crucially of all a battle within Knivet himself… Will he succumb to the savagery of the wilderness he finds himself in? Will he make something of himself in this strange continent and prove himself to the family who rejected him? Will he be able to incite the tribes of Brazil to rise up against their Portuguese oppressors once and for all?

Many thanks for your thoughts on historical fiction, Luke. And congratulations on your debut novel. Sounds like a story with lots of drama!