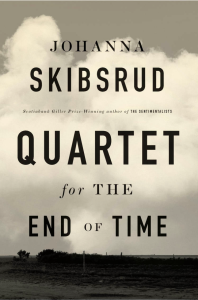 Johanna Skibsrud is the author of The Sentimentalists, winner of the Scotiabank Giller Prize, and This Will Be Difficult to Explain, as well as two poetry collections. I’m delighted to have her on A Writer of History sharing her thoughtful perspective on historical fiction.

JS: I believe that a writer’s responsibility should always be (regardless of the story they are writing, or its setting in either place or time) to write “bravely”—to trust, on a very deep level, in the possibility of accessing, through fiction, some larger understanding of our shared reality. This means our history, certainly—especially in the case of literature set in the past—but it also means our contemporary moment, and possible futures. In her introduction to the 1987 reprint of The Lefthand of Darkness, Ursula K. Le Guin writes:

“Fiction writers, at least in their braver moments, do desire the truth: to know it, speak it, serve it. But they go about it in a peculiar and devious way, which consists in inventing persons, places, and events which never did and never will exist or occur, and telling about these fictions in detail and at length and with a great deal of emotion, and then when they are done writing down this pack of lies, they say, There! That’s the truth!”

Le Guin is speaking here, of course, specifically about science fiction—which I guess in some ways could be thought of as the direct opposite of historical fiction—but in fact I think they have a lot in common. Good historical fiction, like good science fiction should have at its root (as Le Guin claims for The Lefthand of Darkness) this central irony:

“This book is not about the future. Yes, it begins by announcing that it’s set in the “Ekumenical Year 1490-97,” but surely you don’t believe that?”

Likewise, I don’t consider my book, Quartet for the End of Time, to be a book about the past. I hope—instead—it’s about how the past continues to have agency through the stories that we tell about it, about the generative possibilities inherent to its continual, imaginative, reinterpretation.

The book grew out of two different historical moments and inspirations—the first being the Bonus Army March of 1932. If you’re as unfamiliar with that event as I was before I stumbled upon a brief reference to it back in 2008, the Bonus March was a movement of over 40,000 World War One veterans and their supporters who marched on Washington in the summer of 1932 in order to demand an instant cash payout of the “Bonus” the veterans had been promised for their service in the War. On July 28, 1932 the protesters were forcibly expelled from Washington by the Army—the charge led by no less a figure than Army Chief of Staff General Douglas MacArthur. The Bonus camps were burned to the ground, and two veterans were killed.

At first, my fascination with this event was primarily with the question of why I had never heard of it before. But then, with the concurrent housing market crisis, I got to thinking about the imaginary aspects of our financial, social, and political realities, which the “Bonus” of 1932—actually a life insurance policy—seemed to so eloquently express. As I was writing—and even now, after the project’s been completed—the connections to our contemporary moment continue to accrue. For example, the book was released in the same year that our attention was drawn, once more, to the precarious nature of our social contract by the murder of Michael Brown in August 2014. Once more we’ve been forced to confront—and therefore given the opportunity to change—the gross inequalities within our culture and systems of justice, to recognize that the regular suspension of due process in this country, and the failure of the State to manage the use of lethal force against its own citizens is a gross breach of the democratic process we believe is ours. It’s important to make these connections between the present and the past. To think about important developments and differences, of course—but to think through the continuities in either case. That is: to think the way that our present moment has been and continues to be shaped by the past. It is only by doing this that we might be able to imagine an alternative future, and fiction is one expression of this. With fiction, we are permitted to run up against the limits of our experience, our imaginations, to look around, to ask questions, to say, “there must be another way…”

My other major inspiration was Olivier Messiaen’s chamber music piece Quartet for the End of Time, for which, of course, my novel is named. In this case, what interested me was Messiaen’s willful intersection of consonance and dissonance—as well as the historical details of the quartet’s creation. Messiaen first wrote and performed the piece in 1941, in a German prisoner of war camp and there was controversy at the time, and even among the musicians, over whether participating in the premiere was a form of collaboration with the German Army. Messiaen insisted vehemently then (and he continued to do so long after the war) that music exists quite apart from questions of politics and war. With my novel, I wanted to ask if this could really be so. I wanted to think about the limits of responsibility, and the very thin line (if indeed it exists) that separates art from politics, public from private, ideal from idealogy, the present from the past.

I read a lot and take a lot of cryptic, nearly illegible notes. I watch movies and listen to music. I think that being a poet, and—in terms of my own reading and scholarship— primarily interested in poetry helps, too. I think less about the mechanics of the scene—of its different elements as discrete “parts”—and more of trying to access, through attention to language, some idea of a “whole,” which already necessarily exists. Another way of saying this, I guess, is that I prefer the artistic model of “medium” over “inventor” or “creator.” I don’t mean to be mystical or mysterious—I’m just trying to come up with some way to talk about the complex but very ordinary experience of being a human being in the world with language and an imagination—and some sense of the way that one is always both creative of as well as created by one’s history.

If you think of it, history is all we really have as writers, and as human beings. Even fiction set in the future is still essentially historical in terms of its inspirations and structure. But the reverse is also true: even while deeply interested in history, a writer of historical fiction has no choice but to be rooted in a very keen appreciation of, and attention to, the present. The (nearly limitless) material is, in either case, the same, and I firmly believe there should be no fast rules in terms of content or style. Nothing is inherently interesting or important; either that, or everything is. It’s a fiction writer’s job to reveal that this second formulation is the more true: to draw attention to what might otherwise be forgotten, or go unnoticed—to find a way for that level of attention to transmit.

A really wonderful trend in historical fiction has been the retelling of well-known historical episodes from the perspective of individuals whose voices have been routinely suppressed. I think of Joseph Boyden’s The Orenda, Ali Smith’s, How to be Both, Colm Toibin’s The Testament of Mary, Lawrence Hill’s The Book of Negroes; in poetry, M. NourbeSe Philip’s Zong, Craig Santos Perez’s Unincorporated Territory series.

The novel is structured around Messiaen’s chamber piece, Quartet for the End of Time, and features four distinct voices: WW1 veteran Arthur Sinclair and his son, Douglas, and two children of a powerful U.S. congressman, Alden and Sutton Kelly. During the Bonus Army riot of July 28, 1932, the fates of these four characters inextricably intertwine when Arthur is falsely accused of conspiracy, then disappears. Arthur’s absence haunts his son, Douglas, as well as Alden and Sutton Kelly, as their lives lead them in very different directions through the dynamic political and social changes leading up to and during the Second World War. Douglas makes his living working for various New Deal projects, bumps into Hemingway in the Florida Keys, and is nearly killed in the Labor Day Hurricane of 1935. Sutton travels as a journalist through the American dustbowl of the 1930s, the South Pacific in the early 40s, and finally to Europe where she witnesses the aftermath of the fall of Berlin. With Alden we encounter the underground world of Soviet espionage in the 1920s and 1930s, the occultist circle of P. D. Ouspensky and London during the Blitz, the spy world of occupied Paris, and finally the story of the German prison camp where Messiaen originally composed and performed his famous Quartet for the End of Time.

Many thanks for being on A Writer of History, Johanna. And best wishes for success with Quartet for the End of Time.

6 thoughts on “Inside Historical Fiction with Johanna Skibsrud”