After exchanging emails and Facebook messages with Margaret Porter for a few years, I feel I know her, so I am delighted that she agreed to be on A Writer of History today talking about historical fiction. Margaret also did me the great honour of reading and endorsing Lies Told in Silence as well as Time and Regret.

For me, these ingredients would be compelling and motivated characters, a plausible and engaging storyline, sufficient and believable conflict to sustain the plot, and a high degree of historical accuracy, based upon the author’s research into his or her chosen period. Whether or not the novel centres on a single and specific historic event, or spans decades, is biographical or is entirely fictional, all these elements in combination with evocative and effective writing style ensure a gripping read. My most unforgettable books—whether I read them long ago or as recently as last week—fit this description. The authors I most admire make it look quite effortless, and yet their diligent effort shines forth on each page. The best historical fiction authors possess highly-tuned selectivity. They (probably with input from a good editor) understand what is essential to include in the novel, and what is best left out. What might require detailed exposition or description, and what may be left for the reader’s imagination to fill in. It’s terribly important to me to trust a reader’s intelligence, because readers of historical fiction have so much of it!

It’s not as widely read, which is too bad. And because the readership isn’t as broad, it’s marketed differently. We are better at defining historical fiction genres—biographical, mystery, thriller, saga, military, which surely helps the readers find what they’ll most enjoy. The biggest difference is that the author of a contemporary novel needn’t reveal certain specifics of current life to a reader in the same way as for a book set in past times. We therefore must at times clarify the complexities of daily life for characters lacking our modern conveniences—with regard to food, fuel, clothing, lighting, travel, religious belief, effects of wartime, consciousness of political or monarchical changes, and so much more. Not that the writer provides a written dissertation on how things were different—they are best revealed through character, action, and conflicts large and small.

One of the most important aspects, I feel, is the behaviour and mindset and environment and the worldview of the characters. These all relate to motivation and response to obstacles and conflict. As a reader-author, I’m quick to notice anachronistic ways of thinking, reacting, speaking, and acting.

I’m very immersive. So many of my characters were real people who left traces of their personalities and activities on the historic record—letters, deeds, wills, and so on. Whenever I access these materials, I try to read between the lines. I compare their personal timelines with the historical timelines to see where they fit in—and don’t. What they experienced personally. What they knew, what they didn’t know, when and how they would learn about an event that affects them within my story. This helps me to imaginatively re-create conversations that might have happened. For entirely fictional characters, the process is much the same, I try and identify real people who might be similar and trace their lives as a foundation for creating a person who lives only in the pages of my novel. In addition to available primary sources—biographies, memoirs, letters, etc.—I delve into secondary sources connected with the people and their period.

I travel extensively, visiting places my characters lived or would have known well, and take hundreds of detailed photographs. Whether or not I am writing real people, I rely on portraits of people and places as they were at the time the novels take place. I study maps, floor plans of building. I hunt for objects used by or connected with my real-life characters. I study types of clothing worn, and because I worked in the theatre for many years, I have the advantage of having performed in the costumes of every era I’ve written about—so far. I read recipe books, dictionaries, conduct books published at that time. I listen to music that might have been familiar to my characters, read the poets and authors they would’ve read, and study the plays they attended.

The many areas covered in my research reveal what aspects are foundational for me. Obviously I don’t include all my discoveries, only those most pertinent to the story I’m telling and the impact I need within a scene or chapter. I also try and find reasonable ways to introduce the smaller, more intimate moments of a character’s life without slowing the flow of the story, alternating them with the moments of great intensity and influence on plot development. I bear in mind that aspects of the past that seem unusual or different or even quite bizarre to the modern reader would have been commonplace to the people I’m writing about. One example of this is the individual’s relationship to the church. Because it was highly significant, to discount or ignore it seems unrealistic to me. Therefore I acknowledge it, either subtly or not, depending on circumstances.

I like to think that the trend in HF is that there are no trends—with the ever-popular Tudors as the sole exception! It ought to be trend-less in the sense that a novel should emerge from a writer’s fascination with a fictional or imaginary character, a period of history, a significant or intriguing obscure event, regardless of all other considerations. Writers need that passion and enthusiasm to propel them forward throughout the process. Because what we do is hard work, however rewarding, and requires enormous time, attention, and effort.

It does seem that traditional and independent authors are equally expanding the horizons of periods covered, and in some instances focussing on the types of people whose stories haven’t been told as often—or at all. Obscure individuals who are more relatable to the average reader than a king, queen, or aristocrat. And they are increasingly exploring less familiar periods and more diverse locations—Asia, Africa, South America, the farthest reaches of the globe, in fact, enriching our perspectives on world history.

That said, there will always be a market for tales of the powerful, and there’s no denying the drama and conflict in their lives. I see no diminishment in readers’ desire to experience well-known historic figures in a more intimate and vivid fashion than in the history books.

There are many more books set in the 20th century nowadays, increasingly regarded as fertile ground for historical fiction authors—you are one of them. Downton Abbey probably influenced interest in the opening years of that century. Television so often influences trends in fiction. Games of Thrones and The Last Kingdom will doubtless be responsible for future explorations of the Dark Ages. Sleepy Hollow and Turn: Washington’s Spies might increase the number of American Revolution novels. And for a few years more we’re within the centenary of World War I. I notice more novels depicting that era—whether or not the war is a focus—than in the past. 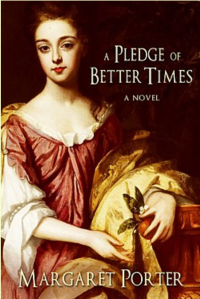 A Pledge of Better Times explores the political and religious upheavals of late 17th century England through real-life characters at royal courts in England, Holland, and France. The chief protagonists are Lady Diana de Vere and Charles Beauclerk, illegitimate son of King Charles II and actress Nell Gwyn. I thoroughly enjoyed the research, chasing my protagonists through the royal palaces and around England and on the Continent. I’ve also spent many hours in the British Library and public and private archives, reading documents they left behind (oh, that 17th century handwriting!)

Queen Mary II befriends her youthful attendant Diana, whose father the Earl of Oxford is a veteran—and highly conflicted—courtier of long pedigree and whose mother is notorious for her many affairs. Charles, the 1st Duke of St. Albans, bears the royal blood of the Stuarts yet his mother sold oranges in a theatre before treading the boards and catching the king’s eye. My protagonists regard court service from very different perspectives, experiencing multiple tumultuous reigns and one revolution—from James II through William and Mary, Queen Anne, and George I. They lived during very interesting and complicated times, so the novel contains intrigue, scandal, warfare, religion, and plenty of family dysfunction!

Sounds like a wonderful premise and time period for a novel, Margaret. And many thanks for being on the blog today.

Oct 2016 Update: To explore other authors offering insights on historical fiction, you can read interviews with Johanna Skibsrud, David Blixt, Stephanie Cowell, Stewart Binns, and many others.