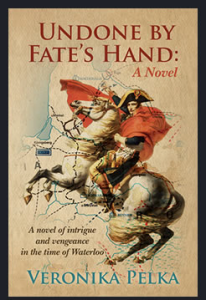 Veronika Pelka is the author of Undone by Fate’s Hand – now isn’t that a great title – and has graciously agreed to tell us about her writing process. Veronika was born in Europe and educated in the U.S. She holds history degrees from the University of Illinois and the University of California and has contributed numerous book reviews to the Historical Novel Society’s magazine.

For me, the main ingredient is the storytelling power of the author. If the writer possesses the skills to create engaging characters and a unique world in which I loose myself for hours, I consider that pure magic. The best historical writers (M.M. Kaye, Dorothy Dunnett, John Fowles, William Styron) are (and were) gifted storytellers who engage us quickly, give us memorable characters and leave us with emotional insights to the human condition that we could never have arrived at on our own.

I judge contemporary novel writers by the same standard as authors of historical novels. Here too, the author has to engage my curiosity or offer me an escape. (Some of the best writers also teach with skill–i.e. Louise Penny.) If the main characters are not redeemable, if the setting is only concerned with the daily grind of modern living, and if the theme is preoccupied with one of the seven deadly sins, I will likely return to a good biography or historical novel for my reading pleasure.

To date, I have limited my writing to 19th century Europe. One thing I try to show is how political institutions and society were changing and yet they were more complex and sophisticated then we realize.

The fact that everyone in Napoleon’s time spied on his or her neighbor is meaningful. As is understanding that elaborate government spy networks existed in many countries. People had few personal freedoms and even fewer legal protections. Long periods of military conscription were common and many a mother never saw her son again once he left home.

The idea that experiencing war either as a civilian or a soldier leaves people psychologically damaged is not unique to our time. Nor is discrimination, tyranny, influence peddling and bribery, political intrigues and onerous taxation. The role of woman varied greatly in the 19th century, depending on her class in society. For those possessing little power or influence and no ancestry or fortune, life in the 19th century was often short, difficult and dangerous. And yet, men and women demonstrated bravery, had faith, found love and persistence in the face of such odds.

Although I believe a writer has a great amount of creative license when it comes to creating his or her stories, I personally feel I must be as historical accurate as possible. Hence, by the time I start writing, I have already done considerable research. It is normal for me to spend days in a university and large public libraries searching for primary sources (i.e. government documents, letters, diaries, autobiographies, maps etc.) and secondary sources like biographies, journal articles and monographs. I am also a heavy user of the interlibrary loan services of my local library. If possible, I travel to the places I write about. For my novel “Undone by Fate’s Hand” I was able to walk the same streets of Paris and Vienna, as my characters. Lastly, I never go anywhere without a camera. Quite often, studying the photos on my return home helps with the rewriting process.

Above everything else, I need to understand and communicate the culture in which the characters live. A good deal of conflict in stories comes from characters misunderstanding each other’s norms and customs. In the 19th century, a character’s social class, religion, education, family background or ancestry could predict much of their behavior.

I also tried to see a historical event as unique to that time and place. History is not linear nor is “progress” inevitable. Many cultures accept the notion of fate. In 19th century Europe it was often called Divine Providence. Although we like to create strong, determined characters, success does not always lead to more success. Nor, can men and woman always control their destiny. Not in history and therefore, not in the historical novel.

I hope the “Indie-publishing” trend continues and new historical time periods will begin to appear in our genre. I also hope that our novelists will find satisfaction in writing for smaller audiences.

“Undone by Fate’s Hand” opens in Paris in 1810, eventually moves to the Congress of Vienna and ends after the battle of Waterloo. It is the story of an English woman whose French husband fails to return from the Russian campaign and a Polish soldier who survived the horrific invasion. Once Napoleon Bonaparte is exiled to Elba, and a new Bourbon King returns to the French throne, Paris becomes a dangerous place for former Bonaparte supporters.

Captain Alexander Dariusz Mazowski is intent on finding his brother’s murderer, when approached to undertake a secret mission for the exiled Emperor. Meanwhile, warned that she is about to be arrested, Johanna Bredonne leaves Paris only to be intercepted on her way to England by Mazowski’s men. And so begins the fated interaction of this two characters.

The story has numerous other characters including an English spy, an Austrian major, a French Madame and a villain from the childhood past of Johanna Bredonne and her friend Collette Dutasche.

Though the story takes place 200 years ago, I hope the reader will find much in common with these characters and their conflicts.

Many thanks for being on A Writer of History, Veronika. I’m jealous of your history degrees, no doubt that helps with the research process.