Yesterday, Elaine Cougler, author of The Loyalist’s Wife, nominated me for The Creative Blogger Award and I’m blushing with pride. (Can you blush with pride?? In any event, you know what I mean.) MANY THANKS, ELAINE!!

Elaine and I met at this year’s Historical Novel Society conference and had no trouble diving into conversation about writing and historical fiction in particular. And, as fellow Canadians we had other things in common! 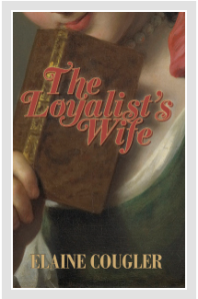 The Loyalist’s Wife is part one of a trilogy set during the Revolutionary War between Britain and the United States.

When American colonists resort to war against Britain and her colonial attitudes, a young couple caught in the crossfire must find a way to survive. Pioneers in the wilds of New York State, John and Lucy face a bitter separation and the fear of losing everything, even their lives, when he joins Butler’s Rangers to fight for the King and leaves her to care for their isolated farm. As the war in the Americas ramps up, ruffians roam the colonies looking to snap up Loyalist land. Alone, pregnant, and fearing John is dead, Lucy must fight with every weapon she has.

With vivid scenes of desperation, heroism, and personal angst, Elaine Cougler takes us back to the beginnings of one great country and the planting of Loyalist seeds for another. The Loyalist’s Wife transcends the fighting between nations to show us the individual cost of such battles.