Richard Hoskin has written for pleasure and profit ever since he grew up in a family of journalists in Cornwall, the Celtic tip of Britain. Cornwall is the legendary home of ghoulies and ghosties, and long, leggity beasties, of pirates and smugglers and of King Arthur and his Knights of the Round Table. Today Richard tells us about the origins of his novel The Miner & The Viscount and shares a few of his thoughts on writing historical fiction. Over to you, Richard.

Although I did not realize it at the time, the birth of The Miner & The Viscount began when a professor friend asked me to contribute a Cornwall segment to his lecture series on aspects of the history and culture of Great Britain. I was recently retired and glad to embark on a new career as a lecturer, holding engrossed audiences in thrall.

“How many lectures would you like?” I asked. “Eight? Six?”

Not quite what I had in mind but at least it would not take much effort, since I knew all about Cornwall having been born and bred there. I did some research to flesh out details, realising that stories from my childhood only skimmed the surface. The result was Cornwall: History, Mystery, Mansions and Mines. It proved a lot of effort for 45 minutes but at least I got them singing a rousing “Trelawney” at the end.

It seemed a pity to leave it at that. My New England wife suggested that since I loved Cornwall and enjoyed history, I should use the material to write an historical novel. She would help with editing. I was convinced. It would be a big project, imagined it would take at least a year. Moreover, I was passionate about telling the story of my Cornwall to a wider world.

The timeframe I settled on was the late 18th century. Widespread change was emerging: the agricultural and industrial revolutions and the invention of the steam engine, social unrest and the rise of Methodism, popular education and the influence of women, political corruption at home and expansion of empire overseas, the beginnings of the Enlightenment.

I assembled sources. Steven Watson, my tutor at Oxford, published The Reign of George III. My brother-in-law, Dr. J.R. Ravensdale had written the volume on Cornwall for the National Trust. Lewis Namier devoted an entire chapter to the machination of the 44 Cornish MPs in his breakthrough work The Structure of Politics at the Accession of George III. There were biographies of William Pitt the Elder (whose grandfather bought Boconnoc), the journals of John Wesley, books on mining, scores of articles to be woven into a coherent pattern. And then there was John Allen’s History of the Borough of Liskeard published in 1856 by John Philp, founder of The Cornish Times.

But above all were my personal experiences of growing up in Liskeard, living in those beautiful places, knowing those sturdily independent people, absorbing their legends and their story. This is what got my imagination surging.

Following expert advice, I planned to begin with an outline. I decided to build my story around Cornish gentry in great houses and miners and farm labourers in tiny cottages. I picked famous historical figures to mingle with my fictitious characters. I thought up a title, The Miner & the Viscount. I picked a start date, 1760. I typed the title and “Outline” on a fresh document. Then I got stuck.

The only outline I ever created was one summarising what I had already written, to keep things straight. “A pleasure to make your acquaintance, my good man.” “But my lord, you already had me flogged in Chapter Six.”

I just started writing drafts. Fortunately, as I got into it the characters magically took over. Their loves, their hates, partnerships, rivalries, joys, sufferings, doings: their story became my story. I would finish a chapter and stare at my computer. What ever would happen next? And Willy Bunt would come into my mind. “Us just ’as to get on with it, zir, Oi’ll tell ’e what Oi’d do if Oi were ye.”

After three years and six rewrites I had a finished manuscript. A research trip to Cornwall would enable me to fill in a few details, add a little local colour. We visited Liskeard, Port Eliot, Boconnoc, Lanhydrock, Bodmin Moor, the tin and copper mines down west, absorbed the countryside, heard more stories about the people who lived there in the 18th century. We met Maureen Fuller, Grand Bard of the Cornish Gorsedh and she agreed to translate some dialogue into the ancient Cornish language, adding so much authenticity.

Back in Kentucky an experienced member of my writers’ group offered to burnish the final version, a little tweak here and there. After three more rewrites, 25,000 more words, and two more years we sent the manuscript to the publisher.

The story of Cornwall was finally mine to tell. Well, perhaps with a little help from Willy Bunt.

Many thanks for telling us about your writing, Richard. 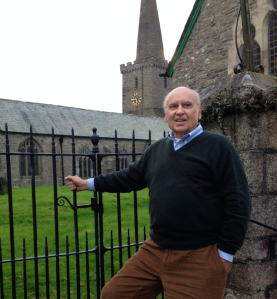 The Miner & The Viscount by Richard Hoskin

The Miner & the Viscount is set in the author’s native Cornwall in the late eighteenth century, a time of social turbulence and historical significance, when Cornwall mirrored the history of Britain: the birth of the industrial and agricultural revolutions, the expansion of empire, the coming of the Enlightenment, the rise of Methodism. A royal duchy, Cornwall had 44 Members of Parliament (as many as all of Scotland); new-fangled steam engines worked in her tin and copper mines; her seamen explored the world’s oceans and her politicians led the exploitation of America. Strong characters, both historical and fictional, struggle with wealth and poverty, ambition and idealism, love and hatred, honor and revenge. They wrestle with the issues that faced them in this fascinating and vital period and offer us insights into what we face today.

1 thought on “The Miner & The Viscount by Richard Hoskin”