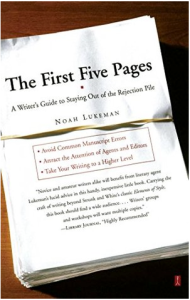 No, I’m not the pro, but Noah Lukeman is. Lukeman is the author of The First Five Pages: A Writer’s Guide to Staying Out of the Rejection Pile. As an experienced literary agent based in New York City whose clients include Pulitzer prize nominees and New York Times bestselling authors, Noah Lukeman knows a thing of two about finding top-notch manuscripts to represent. And he presents his advice simply and succinctly, using lots of examples to illustrate his points.

I’ve been revising Time & Regret so a book designed to help writers stay off the rejection pile seemed an excellent one to reread. I thought some of you might be interested in the notes I took as a result. Today’s post will be part one of two.

Revise for sound by reading your MS aloud

Use comparisons to cut down on description

Dialogue is a powerful tool, to be used sparingly, effectively and at the right moment.

So that’s round one with Noah Lukeman. Part 2 covers hooks, subtlety, tone, focus, setting, pacing and progression. I hope these are helpful. Gotta get back to my editing!

16 thoughts on “Manuscript revision – advice from a pro”