I love researching WWI – of course, there are the gory bits, the heartbreaking tales of tragedy and equally heartbreaking stories of endurance, but research also turns up fascinating information about military life and everything else surrounding and supporting it. Casualty clearing stations were on my list this week.

Looking after the wounded in WWI required a tiered approach: treatment that occurred in the field, literally in the field or in the muck that used to be a field. Unless a wounded soldier could walk, stretcher bearers brought them in for that first round. Those who did not need much care were quickly patched up and then carried on fighting. Those requiring more care went by ambulance to a nearby casualty clearing station or CCS.

At the CCS, the wounded were sorted again: those treatable at the CCS, those likely to die, and those needing more extensive hospital care. Above photo shows the wounded waiting outside a CCS.

Here’s a description of what went on in the resuscitation ward of one CCS. Source: From the Trenches: The best ANZAC Writing of World War One by Mark Dapin.

The work in the resuscitation ward was indescribable. The butchery of those precious lives — men of such splendid physique! To watch them dying in such numbers was ghastly. Their frightful condition was appalling: clothes saturated; faces caked with mud; the conscious ones smiling grimly, glad to be wounded and out of it.

From WWI regimental and battalion diaries I found statistics of operations performed, wounded evacuated and deaths per month along with personnel changes and details of important visitors, recreational activities and supply requirements. In another account  from the diary of May Tilton, I found details of an air raid: 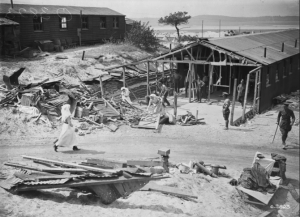 We were having a trying time from air raids one night when we were working at high pressure. Fritz came nosing about overhead, his machine flying so low that he seemed to be just above our tent. Everyone was deathly quiet, staring at each other, not daring to ask what we were thinking. It was an awful strain on the surgeons, with their close and critical work, and no decent sleep for weeks. But they worked on as calmly and quietly as though the menace in the sky did not exist; and when the bombs exploded with a deafening roar, making our heads pound and throb, we breathed a sigh of relief that the operating tent had escaped, and our work could go on.

Source: Through These Lines

The CCS that is relevant to my current novel Time & Regret is in Longuenesse, a village outside St. Omer in the northern part of France. Apparently it was partly housed in an old chateau – shown in this picture – augmented with various wooden huts constructed as sleeping quarters, resuscitation wards and surgeries.