Tony Riches is a UK historical fiction author living in Pembrokeshire, Wales. We met online as people do these days and have developed a friendship across the Atlantic. Tony hosts The Writing Desk – a blog that “aims to create insightful, relevant content to encourage new writers and support authors with book launches, reviews, guest posts and useful links.”

Here Tony discusses his latest novel about Owen Tudor, the Welsh servant who married the Queen of England and founded the Tudor dynasty:

I was born near Pembroke Castle and often visit the small room where the thirteen-year-old Lady Margaret Beaufort gave birth to the future king, Henry Tudor. I also recently stood on the remote beach at Mill Bay near Milford Haven, looking out to sea and imagining how Jasper Tudor would have felt, as he approached with Henry and his mercenary army to ride to Bosworth – and change the history of Britain.

These experiences made me wonder about Owen Tudor, the Welsh servant who somehow married the young widow of King Henry V, Queen Catherine of Valois, and began this fascinating dynasty. I felt a responsibility to research his story in as much detail as possible and to sort out the many myths from the facts. There are, of course, huge gaps in the historical records, which only historical fiction can help to fill. As well as there being no surviving record of Owen’s marriage, no reliable image of him exists.

There are numerous references to Owen in other books – but I was surprised to discover no one had tackled a full account of his life. Most authors seemed to lose interest in what happens to Owen after the death of Queen Catherine, and many accounts repeat the story that Owen ‘fell into Queen Catherine’s lap’ during a drunken dance. (This is possibly based on a misunderstanding of a sonnet by Elizabethan poet Michael Drayton, a century later, which says, ‘Who would not judge it fortune’s greatest grace, since he must fall, to fall in such a place’. I believe this was not meant literally but that Owen was lucky to be close to Catherine at such a lonely time for her.)

As I started the research, I realised the story of Owen’s son, Jasper Tudor, would need a whole book to do it justice. I also decided that Owen’s grandson Henry and his marriage to Elizabeth of York would be an ideal subject for a third book – and the idea of a ‘Tudor Trilogy’ was born. When I was taught Tudor history at school, there was no mention of Owen Tudor and Henry VII was only mentioned as the victor at the Battle of Bosworth, before moving on to the six unfortunate wives of his son, King Henry VIII.

I felt Owen Tudor’s full story deserved to be told, as he was thirty-seven when Catherine died and he lived to the age of sixty. It was fascinating to explore his later adventures as a Captain in Normandy and his part in the beginning of the civil war which became known as the Wars of the Roses. Amongst other things, I discovered he fathered another son, Dafydd Owen, at the age of fifty-nine, who became a knight and fought at the side of King Henry VII at the Battle of Bosworth.

It is hard not to like Owen Tudor, as he was a ‘self-made-man’, proud of his Welsh ancestry, at a time when birthright was everything and the Welsh were second-class citizens. He was also amazingly resourceful, as he escaped from prison several times, including the notorious Newgate Jail. He risked everything to make sure his sons had the best start in life – and changed the history of England with his legacy. I tried to show Owen as a man with human flaws readers will be able to identify with. He is a risk-taker, who often places too much trust in others and feels personally responsible when things go wrong. At the same time he is a popular and charismatic figure, with a good sense of humour. I hope this new Tudor trilogy will help people understand and take more interest in the life and times of Owen Tudor, his sons Edmund and Jasper – and his grandson King Henry VII. 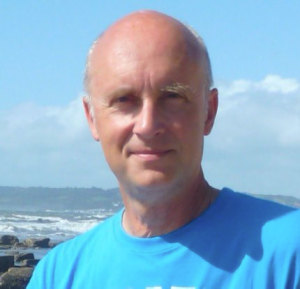 Many thanks, Tony. With all that history and turmoil, I’m sure Owen and the rest of The Tudor Trilogy will be a huge success.

Earlier this year Tony wrote about Inside Historical Fiction – what makes this genre unique.

You can find out more on Tony’s blog ‘The Writing Desk’ at www.tonyriches.co.uk and find him on Twitter @tonyriches. Owen – Book One of the Tudor Trilogy is available in eBook and paperback on Amazon and all formats on Smashwords.

M.K. Tod writes historical fiction and blogs about all aspects of the genre at A Writer of History. Her latest novel, LIES TOLD IN SILENCE is set in WWI France and is available from Amazon, Nook, Kobo, Google Play and iTunes. Mary can be contacted on Facebook, Twitter and Goodreads.