One of my favourite words is serendipity. Not only do I love the way it rolls off my tongue, but I also love what it means. Carol Bodensteiner, author of Go Away Home is on the blog today talking about serendipity. She is a wonderful author. I’m sure you will enjoy what she has to say. Over to you, Carol.

I like control. I’m most comfortable when I know what’s going to happen, when and how. But my writing and publishing journey has shown time and again what fun there is when things happen by chance. Serendipity is a beautiful thing. Those chance occurrences that surprise and delight and bring joy to our lives and smiles to our faces. I’ve been lucky to have several serendipitous moments mark my journey in writing and publishing my WWI-era novel Go Away Home.

Fiction turns out to be reality. Over the years, I vacillated: set my novel in the county seat near where I grew up or create a fictional town? Over years of writing, I went back and forth on this decision with some regularity. Fortunately, the ‘search and replace’ function of Word makes such dilly-dallying reasonably simple.

Meanwhile, my story developed to include a prominent banker who lived in a large house equipped with electricity, a grand piano in the library, and a sumptuous buffet in the dining room.

About a month before I sent the final manuscript to the editor, I said, enough! Though the story is fictional, the location is now firmly set in a real town – Maquoketa, the county seat of Jackson County, Iowa. Having made that decision, my obsession for getting the historical details right took on new focus. I had a responsibility to those who know the town to get it right. I headed east for a drive through Maquoketa.

When I pulled up in from of the house of my dreams, I learned the it is now the Squiers Manor Bed & Breakfast. The folks at the B&B readily took me for a tour and here’s what I found: The original owner was a prominent banker; the house was the first in town to have electricity and running water, and there is a grand piano in the library.

What a delight to find that what I’d been writing mirrored the actual history and much of the layout of the building.

The right resources at the right time. As I considered my need for a cover designer, serendipity delivered a cover reveal post for Lies Told in Silence by M.K. Tod right here on A Writer of History.  I loved the cover and knew the designer of that cover was the one for me. What luck to find Jenny Q, a talented woman who specializes not only in designing historical fiction covers but who is also a terrific editor.

She designed a cover that perfectly communicated the mood of the novel. Then she took on the manuscript, smoothing out choppy and disjointed places, suggesting more appropriate word choices, questioning and clarifying when my meaning grew hazy. She also did more. While I had not hired her for a developmental edit, she pointed out several places where the story would benefit from slowing down and building more emotional depth into my main character. I spent my career in the service business so appreciated the value Jenny brought to my book.

Publishing. I indie published Go Away Home in July 2014. At the end of the year, an email popped into my inbox from an acquisition editor at Lake Union Publishing, an imprint of Amazon Publishing. They’d read the story, loved it and wanted to talk about whether I was interested in partnering with them. I felt like the average girl sitting at the soda fountain counter noticed by a big-name producer and cast in a major motion picture.

I haven’t made out a Santa wish list in decades. Even if I had made one last year, signing with a publisher would NOT have been on it. That would have been too unbelievable. Yet here I am.

Go Away Home re-launches with Lake Union Publishing on July 7.

I talked with a friend about how what I need always sees to appear right in front of me at the moment I need it. Ever practical, she said those things were always out there and it was only when I started to focus on the need that they became visible.

Her response seemed a bit of a buzz kill. Yes I did research that created the kind of house that a rich family like my banker would have occupied in the early 1900s. Yes, I made contacts and follow blogs written by smart authors who use and share quality resources. Yes, I worked hard to write a good story and then to get a lot of honest reviews.

So, yes, I was controlling everything I could. But then those little extras appear. Luck. Magic. Serendipity. 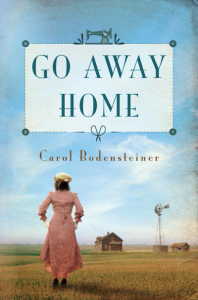 Go Away Home – Iowa farm girl Liddie Treadway has big dreams: to move to town, work as a seamstress, live on her own. But it’s 1913. Can a girl choose both love and independence? You can find my review of Go Away Home here.

Go Away Home is available on Amazon in paperbackand ebook formats.

Growing Up Country is available on Amazon in paperback, ebook, and audio book formats.

Carol Bodensteiner is a writer who finds inspiration in the places, people, culture and history of the Midwest. After a successful career in public relations consulting, she turned to creative writing. She blogs about writing, her prairie, gardening, and whatever in life interests her at the moment. She published her memoir Growing Up Country in 2008. Her debut WWI-era novel Go Away Home first published independently was acquired by Lake Union Publishing and launches July 7, 2015.

7 thoughts on “The Beauty of Serendipity in Writing & Publishing”