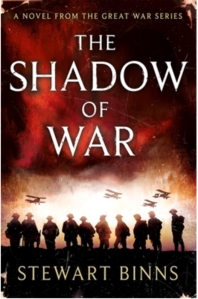 Stewart Binns is an author and award-winning filmmaker. He has written the Making of England quartet consisting of Conquest, based on the Norman Invasion in 1066, Crusade which looks at the Norman rule of England and the first crusade to the Holy Land, Anarchy which tells the story of civil war between Stephen and Matilda, and Lionheart about Richard II and the third crusade. In 2014 he released The Shadow of War, the first of a five-part series on WWI.

I am delighted that Stewart Binns has agreed to be interviewed on the blog to give his perspective on inside historical fiction.

MKTod: What are the ‘magic ingredients’ that make historical fiction unforgettable and irresistible?

Stewart Binns: The juxtaposition of the real (most writers base their stories/characters on real events/people) and the flights of fancy of the author’s vivid imaginings. You get the best of both fiction and non-fiction. Interestingly, I’ve had many readers ask how much of what I write is ‘true’.

MKT: Are historical novels inherently different from contemporary novels, and if so, in what ways?

SB: Yes. See above, but also because the past is removed from us, so we can take more liberties with it in terms of drama, intrigue and context. I suppose it’s not unlike Sci-fi in reverse. In my first novel, it was vital that Hereward of Bourne (the Wake) fought at Hastings – did he? Almost certainly not, but he might have.

MKT: In your opinion, what do top historical fiction writers do to ‘get it right’?

SB: Do their homework to get their context right. Use history as an open door to a great story. Take their readers on a compelling journey through another time and place that is rich with powerful imagery, engaging characters and momentous events.

MKT: What aspects about the past do you specifically try to highlight in your novel(s)?

SB: That things were very different then, but also that nothing fundamental really changes (human frailty in particular).

MKT: In writing historical fiction, what techniques do you use to ensure that conflict, plot, setting, dialogue, and characters are true to the time period?

SB: Take years to learn your craft, do meticulous research, undertake thorough fact-checking and use several other pairs of eyes as critics.

MKT: What do you do to make fictional characters true to their time?

MKT: What elements do you feel need to be included when you are building a past world for your readers?

SB: You have to make it as real as possible and then make them believe they’re there.

MKT:Do you see any particular trends in HF?

I think we writers have real problems. Our audience is getting older and thus smaller.

There are too many of us, writing too many books. Too many alternative forms of gratification are available. Not all of us will survive the cull that is inevitable. We’ll self-publish of course, but that will make matters worse, generating yet more books that only a few people will read.

After that? Fewer authors, fewer books; but better ones.

Many thanks, Stewart. I hope others will find inspiration in your thoughts. One stands out for me in particular: “Use history as an open door to a great story.”

7 thoughts on “Inside Historical Fiction with Stewart Binns”