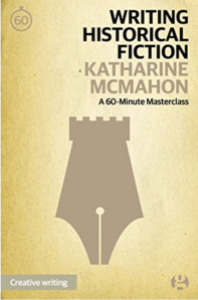 Two days ago, I promised to provide some thoughts based on my reading of Katharine McMahon’s WRITING HISTORICAL FICTION. It’s a small e-book which requires less than two hours to read and, beyond the introduction, is broken into the following chapters: (1) Following Your Nose, (2) Researching the Past, (3) Telling Your Story in Sympathy With the Past, (4) Building Character, (5) How to Describe the Past and What Voice to Use, and (6) Voice.

A number of points stood out for me.

Katharine McMahon explores further that magic I mentioned in the previous post. She feels strongly that an emotional connection to the past is critical to successfully write historical fiction.

the minute I, as a writer of historical fiction, lose my emotional connection with the material, there’ll be a deadness to the writing, and to how I feel about my writing

In great historical fiction, the history and the story combine to generate a whole world of intrigue, analogy and curiosity. But the fiction, and the emotional content of the novel, is the driver.

McMahon believes that historical fiction creates an “unwritten contract between writer and reader“: that fact and fiction are interwoven; that fiction can fill the gaps where history goes silent; that a writer creates the illusion of being immersed in the past; that truth is not first and foremost, but a great story is; and that research underpins the vividness of the story telling.

The reader and I both know that I’m going to interweave the two [fact and fiction] as seamlessly as I would if I were writing a contemporary novel.

‘accuracy’, while being critically important, comes second to authenticity, and a piece of fiction has to be truthful – authentic – only within itself

In the section on research, she describes a novel where the writer has reassembled “the tiniest threads of [her research], in the most delicate, dreamlike structure, only the bits she wants and no others” to tell her story” and encourages writers of historical fiction to take a similar approach to make their stories sparkle, to drive the story, illuminate the characters and setting, to underpin the themes and conflicts.

For her own research, McMahon begins with a general history of the time period (a book not internet research) then dives into the bibliography searching for primary and secondary sources. You cannot research everything, she declares, and in her own case often adds further research as her writing unfolds.

In the sections discussing voice:

The voice, the tone in which the novel is written and the language that is used will all spring from the story, the period, the research and the characters.

And here too, she adds to the unwritten contract between reader and writer, stating that the “reader knows a novel has been written in the 21st century about events in the past” and therefore has certain expectations about voice and dialogue.

McMahon illustrates her points with clear examples and suggests a few exercises writers can undertake. I found the chapter on voice particularly helpful. Summary: a straightforward read with some excellent takeaways.