The Lusitania Conspiracy – an interview with author Ronald J. Walters 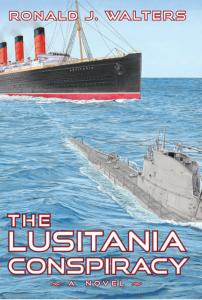 Many readers know that I’ve been obsessed with World War One ever since I began researching my grandfather’s role in that dreadful conflict. The sinking of the Lusitania figures prominently as an event that helped shift public opinion in the United States against Germany and influenced America’s entry into the war two years later. Erik Larson’s Dead Wake released recently to great acclaim and now we have Ronald J. Walters’s fictional account, The Lusitania Conspiracy.

I’m very pleased to have Ronald on A Writer of History.

You’ve written The Lusitania Conspiracy about the unusual circumstances surrounding the sinking of the Lusitania. Can you tell us what drew you to that story?

The Lusitania (for the most part) has been a forgotten historical event that had tremendous significance on a global scale. I never understood why the story of the Titanic was so well covered and the Lusitania story was cast into obscurity. My goal was to entertain and possibly enlighten the reading and viewing audience with a new take on a 100 year old story.

As a history buff, what attributes do you think set historical fiction apart from contemporary fiction?

Historical fiction is rooted in historical facts, with the writer’s creativity and imagination being the added element. About 75% of my book is factually based. Real characters, real events, as opposed to fiction where all of the characters, events and happenings are creations of the writer.

What did you do to “understand the mindset” of the historical figures you’ve written about?

Read as much as possible, from as many different sources as possible.

How did you research and prepare for writing about the Lusitania?

What did you do to create the world of 1915 ocean travel for your readers?

I could have been more descriptive and elegant when visualizing the travel conditions and ship to the readers but I wanted to stay away from looking too much like a documentary. Non-fiction only has this technique to entice the reader. When writing historical fiction you can always create a character or situation that livens up the story.

Which historical fiction authors have inspired you?

I understand you are preparing for a movie version of The Lusitania Conspiracy. How would you compare writing a film script to writing a novel?

Actually, I wrote the screenplay first. To me writing a screenplay is easier. For one it’s shorter and action is at a premium. You need to engage the viewer every minute. With a book you have an outline and shape the story chapter by chapter. The book has over twice as many pages and you have time to expand on characters, give them a distinguishable identity. In a screenplay you cannot tell a character’s whole story so you have to select the most interesting parts of their lives, to give a synoptical version that will tell the viewer just enough so they are not confused but not enough to test their patience.

THE LUSITANIA CONSPIRACY: May 7, 2015 marks the 100th anniversary of the sinking of the RMS Lusitania, the event that catalyzed the United States involvement in World War I. Though the ship’s sinking has guaranteed it a place in our history textbooks, the conspiracy behind it remains shrouded in mystery. Did the British Navy have advance knowledge of the attack? Was the attack preventable? Was the ship deliberately put at risk?

While the answers to these questions may be lost forever in time, there is no shortage of theories as to what really led to the German attack on the Greyhound of the Seas. Bringing to life such influential historical characters as Nikola Tesla, Mark Twain, and Winston Churchill, as well as a host of fascinating characters created by the author, this gripping novel delves deeply into one of the greatest unsolved conspiracies in history and offers a unique look at what secrets might still be lurking in the ship’s dark past.

The Lusitania Conspiracy follows Tesla, perhaps the most brilliant scientist who has ever lived, as he endeavors to make the world a better place through his groundbreaking work with radar and tonal oscillation. But the Allied forces have other plans for Tesla’s inventions namely, a super weapon that would bring Germany to its knees and ensure the Allies victory in the so-called war to end all wars.

As imaginative as he was scientific, Tesla is joined in his never-ending quest to remain a force for good by his assistant, Li Yín Huo , who shares his boss’s quick wit and penchant for adventure. Once aboard the Lusitania, Tesla and Li find themselves tangled in a web of intrigue, where nothing is as it seems and no one is to be trusted.

FOR MORE POSTS ON READING AND WRITING HISTORICAL FICTION, follow A WRITER OF HISTORY (use the widget on the left sidebar)