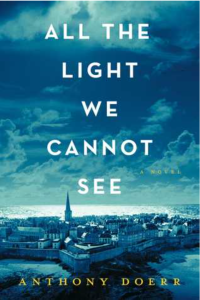 My husband recommended All The Light We Cannot See in January, and again in February. I began reading it then, but was waylaid by other reading obligations. Having fulfilled those, I escaped back into Doerr’s novel a week ago and COULD NOT PUT IT DOWN.

There, got that off my chest. Now that you know how much I enjoyed this novel, perhaps a few words about why.

As Goodreads reviewer Melinda said so succinctly, All The Light We Cannot See is about “A blind French girl and a German boy whose paths collide in occupied France as both try to survive the devastation of World War II.”

The intricacy with which the novel is constructed contributes to its success as Anthony Doerr builds our interest, raising the tension chapter by chapter while switching back and forth between Marie-Laure and Werner with occasional stops with other characters. I never lost the thread, even though the story also switches time periods as it unfolds.

Let’s have a look at the 7 elements of historical fiction as a frame for commenting on the novel.

Characters: characters should “behave in keeping with the era they inhabit” which includes the norms, attitudes, beliefs and expectations of their time and station in life. Werner is an orphan sent to a German school training boys to be soldiers. He’s smart, intellectually curious, and a whiz with anything electronic. We see the German military regime and fanaticism through his eyes and his journey to understand his purpose in life and the goodness life offers. Daughter of an expert locksmith, Marie-Laure is defined by her blindness, yet sees so much. Trapped in St. Malo with her reclusive great-uncle, his housekeeper and a secret some would kill for, it is Marie-Laure who learns how to survive and is brave enough to participate in the fight against Germany.

Dialogue: Anthony Doerr dispenses dialogue sparingly and effectively. He spends much more time on the inner dialogue of Werner, Marie-Laure and others.

Werner: “Why, even at the moment of his escape, must some inexplicable warning murmur in a distant region of his mind?”

“Every part of him wants to scream: is this not wrong? But here it is right.”

“Open your eyes and see what you can see with them before they close forever.”

Sergeant Major von Rumpel: “Waiting, thinks von Rumpel, is a kind of war. You simply tell yourself that you must not lose.”

Frederick” “Your problem, Werner, says Frederick, is that you still believe you own your  life.”

Marie-Laure: “Who knew love could kill you?”

Setting: Ive read and written about WWII. Doerr creates not only scenes of war unfolding in all its gritty devastation, but he also immerses the reader in the atmosphere of living the hell of war as both soldier and citizen. The siege of St Malo is one set, another is the inside of a vehicle designed to find enemy radio transmitters, and a third is Etienne’s house where Marie-Laure lives on rue Vauborel.

Plot: step by step, the plot unfolds. Relentlessly Doerr guides us to the climax. Back and forth in time, back and forth between characters, yet we are never lost. Each scene comes alive. Tension builds.

Conflict: and there is so much conflict. At several points I wondered how the characters could possibly handle another day without falling apart.

Asked why he reveals much of what happens in August 1944 intermingled with the main storyline progressing from 1940 to 1944, Doerr said in an interview with Publishers Weekly:

If I have dinner with you and then at the end I pull out a gun and shoot you, that’s surprise; if I put the gun on the table at the beginning of the meal, that’s suspense.

World Building: an aspect that deserves specific mention is Anthony Doerr’s ability to make us see and feel the life Marie-Laure experiences in blindness. We are with her every step as she taps her way along the streets of St Malo. We feel what she feels, hear what she hears and taste what she tastes. A remarkable feat. Beyond that world, is that of World War Two, seen from both German and French points of view. The school Schulpforta is another part of the world Doerr constructs and here we experience the deviancy of training young boys to be German soldiers. Evil reigns in this world and few refuse to go along.

Beyond these seven elements, I should comment on the author’s superb imagery and prose.

My only caveat — you knew there would be something, didn’t you? — is the ending. To this reader, the novel should have ended soon after the siege of St Malo. The chapters in later years detract from the impact of the main story.

FOR MORE ON INSIDE HISTORICAL FICTION, subscribe to A WRITER OF HISTORY (follow button on the left margin)