A few weeks ago the folks at Trizcom Inc. contacted me with information about Jeff Gusky’s new work Hidden World of WWI – an exploration of the underground world of WWI trenches. I was immediately fascinated. Here’s how Jeff Gusky explains his work.

All images are from that underground world.

“Hidden under the former battlefields of WWI lie hundreds of forgotten rock quarries that were transformed into underground cities beneath the trenches, sheltering armies on both sides of the Great War from mass destruction. Cloaked in darkness under private land in the beautiful French countryside, these underground cities are bristling with artifacts, sculptures and emotionally charged “graffiti” created by WWI soldiers a century ago. Frozen-in-time, these cities beneath the trenches form a direct human connection to men who lived a century ago. They make hundred years ago seem like yesterday. They are a Hidden World of WWI that is all but unknown, even to the French.

American medical doctor, fine art photographer and explorer Jeffery Gusky was introduced to these underground cities by landowners and dedicated volunteers and their families who fiercely guard the secrets of these spaces with loving care to prevent them from being vandalized and to preserve them for the future. Dr. Gusky found it hard to believe that he was the first outsider privileged to systematically explore this Hidden World and that almost nothing about them can be found on the internet. Caretakers shared their precious secrets with Gusky and honored him with exclusive access to create a photographic legacy of this Hidden World, but with the proviso that he would work closely with them to protect these cultural treasures from harm. 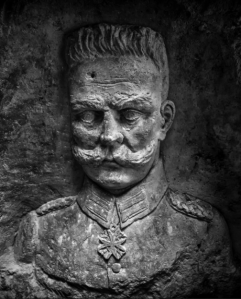 Dr. Gusky has created thousands of images that document the lives, loves, and longings of these modern young men who were the soldiers of WWI. The stone walls of the quarries are soft enough to be carved with simple tools. The men spent long hours recording indelible expressions of their humanity that are as fresh and powerful today as they were a century ago. The images are sometimes poignant and sometimes sad but always deeply moving reminders that these men were not strange doughboys from old movies but modern people who were coping with the dehumanizing horrors of war in the same way that we would cope if faced with these horrors today.

These cities now exist in total darkness. All equipment must be carried underground by hand, often snaking over, under and around shifting debris, frozen mud and fallen rock. Despite this inaccessibility, the underground spaces gave up their wonders under the artist’s visionary approach. Raking light over the carvings to make them stand out clearly, Dr. Gusky has succeeded in creating strikingly beautiful images that cause the viewer to stop and look… really look. The first impression of many viewers is stunned surprise and the second is a desire to linger, discuss and ask questions.

Dr. Gusky’s published work focuses on pieces of the past, hidden in plain sight, that can help us discover who we are and inspire us to ask questions about the vulnerabilities of modern life that we have forgotten how to ask. The Hidden World of WWI is his third major project.”

This last photo was released on July 31, 2014 by Gusky to mark the 100th anniversary of WWI. It is a wartime plaque “crafted by German soldiers in honour of a French soldier who died and was buried right in front of their trench.” The tribute reads “Here lies a French combatant.”

All photos are from Jeff Gusky’s website. I encourage you to explore the images on his site – they tell a stunning story without words.

2 thoughts on “Hidden World of World War I”