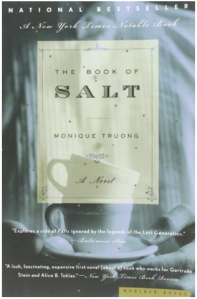 The Book of Salt by Monique Truong promises to serve up “a wholly original take on Paris in the 1930s through the eyes of Binh, the Vietnamese cook employed by Gertrude Stein and Alice B. Toklas. Viewing his famous mesdames and their entourage from the kitchen of their rue de Fleurus home, Binh observes their domestic entanglements while seeking his own place in the world. In a mesmerizing tale of yearning and betrayal, Monique Truong explores Paris from the salons of its artists to the dark nightlife of its outsiders and exiles.”

During our initial round-robin of summary thoughts, which is how we always start, last night’s book club gals had the following to say:

As you can see, impressions were mixed but the discussion was lively and lengthy, a sure sign of a successful choice.

Paper-white narcissuses, one hundred bulbs in shallow pools of moistened pebbles, their roots exposed, clinging, pale anchors steadying the blooms as the angle toward the sun.

In my ear, anticipation sounds like a strong wind billowing against a taut sail, like a fire when its flames are drunk on a gust of air.

… it slammed shut behind us with such a clash that the sparrows fled from the surrounding trees, a scrap of black lace lifting into the sky, that the butterflies rose from the gladiola spikes, their wings filtering for a moment the strong light of the Saigon sun.

… but the truffle, ah, the truffle is a gift for the nose. Pleasure refined into a singular scent, almost animal, addictive, a lover’s body coming toward yours on a moonless night.

Salt is an ingredient to be considered and carefully weighed like all others. The true taste of salt–the whole of the sea on the tip of the tongue, sorrow’s sting, labor’s smack–has been lost, according to my Madame, to centuries of culinary imprudence.

Winter waited for me on the shores of this country like a vengeful dowager, incensed and cold-shouldered … when she blew the first kiss, I welcomed her with arms opened wide, never suspecting that within days she would make me cry.

Roughly 20% into the novel I had been tempted to give up, for I found myself tangled in dense sentences and a plot line that moved backwards more than it moved forwards. Perseverance was richly rewarded and the key was to lose myself in Binh’s (the protagonist) powerful voice and stop worrying about the plot. Once I did both, The Book of Salt glistened with imagery and poignant longing, and the story revealed itself.

8 thoughts on “Book Club Gals read The Book of Salt”