Rage. Fear. Greed. We’re in for a treat today! I’m pleased to have Debra Brown Co-editor of Castles, Customs, and Kings: True Tales by English Historical Fiction Authors on the blog as part of promoting this wonderful new book.

Debra and I have connected on numerous occasions sharing thoughts about writing, checking in on one another’s tweets or Facebook posts, and commiserating from time to time. She’s the author of The Companion of Lady Holmeshire and For the Skylark (2013 release). Debra is also the originator of English Historical Fiction Authors blog and Co-editor of Castles, Customs, and Kings: True Tales by English Historical Fiction Authors. Who knows how she finds time for all these activities! 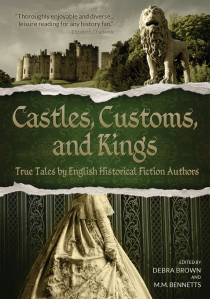 As an artist must draw from what he sees or feels around him, even in abstract works, an author or writer must draw on what his senses have lent- what he has seen or heard. Authors of historical fiction hungrily pursue knowledge of persons, places and events of the past. What are some examples of what we have gleaned, and what states of mind might they pass on to our stories? The following examples are taken from the newly released Castles, Customs, and Kings: True Tales by English Historical Fiction Authors from Madison Street Publishing.

Rage! What woman’s rage has had more effect on a people than that of Boadicea, Queen of the Iceni Britons?

Boadicea was Queen of the Iceni, a tribe of the ancient Britons (in what is now Norfolk) during the era when Nero ruled in Rome and Roman troops occupied Britain. Her husband, Præsutagus, was King of the Iceni, and a Roman ally….

“Unfortunately, Præsutagus underestimated the greed and brutality of the Romans. Immediately upon his death, they not only took possession of his lands, but also seized all of his personal assets.

“The widowed queen was outraged and protested vigorously. For her impertinence, she was seized by the Romans and publicly stripped and flogged. Her daughters were turned over to the Romans soldiers and subjected to indignity and rape. Other Iceni nobles could not help the widow and her daughters for their homes were also plundered and robbed, and those who were close relatives of the deceased king were reduced to either slavery or poverty when their loans were called in by the Romans.

Certainly this was adequate cause for the Queen to become enraged. Not a woman to retreat to her rooms and yield to depression with its loss of will, she took the situation by storm.

Tacitus tells that more than 70,000 Romans, and Britons friendly to Rome, were massacred, and the Ninth Legion marching from Lincoln to the rescue had been nearly annihilated.

Learn how Boadicea accomplished such a feat in Teresa Thomas Bohannon’s article, Boadicea, Warrior Queen of the Iceni Britons, and learn of the final tragic outcome. The true tale of Boadicea inspired the writing of Teresa’s historic fantasy novel Shadows in a Timeless Mist.

Fear! What could fear move a people to do? In the essay Scourge of Europe: The Religious Hysteria Created by the Black Plague, Rosanne E. Lortz describes scenes that fire the writer’s imagination.

Death has always been one of the most frightening prospects faced by mankind. The fear of death even has its own word to describe it—thanotophobia.

“In a society where a third to a half of the people around you have succumbed to death within the past year, the terror of knowing that you might be next can become overwhelming. It can drive a person to bizarre and unthinkable acts as he tries to ward off death’s icy grip from descending on his own shoulder.

Rosanne describes a variety of reactions.

For some, the proximity of the plague created the pernicious attitude of “eat, drink, and be merry, for tomorrow we die.” Immorality, excess, and crime became rife in towns and cities, especially in the metropolis of London, as despairing people grasped after every last piece of self-gratification before death should come for them.

“Others, however, still nourished the hope that the plague might be avoided. Doctors tried the normal remedies of bleeding and laxatives and prescribed more outlandish cures such as drinking one’s own urine. It soon became obvious, however, that medicine had failed to find the answer. As corpse after corpse was thrown in the common burial pits, the only course left to the living was to repent of their sins, cast themselves on divine mercy, and entreat the angel of death to forbear….

“Across Europe, a sect known as the Flagellants began to gain followers. Wearing a uniform of a white robe marked with a red cross—much like the Knights Templar surcoat seen in so many period films—the Flagellants were a society of ascetic laymen determined to atone for the sins of the world. They gathered in groups of anywhere from 50 to 500 men, traveling around the towns of Europe and performing the ritual of publicly scourging themselves.

Rosanne writes, “In my book, I Serve: A Novel of the Black Prince, the hero Sir John Potenhale encounters this group of Flagellants making their demonstration in London. His mother has already been carried off by the plague, his father has been driven insane by it, and Potenhale himself is in a spiritually fragile condition.”

Greed. In many cases, wealth does not bring contentment; it creates a desire for even more. History shows that many wealthy men devised more wealth in an interesting way. Barbara Kyle’s article For Sale: Rich Orphans—The Tudor Court of Wards tells us:

Abduction of heiresses was not uncommon. Certainly it occurred frequently enough to necessitate a statute passed in 1487 under Henry VII, the first Tudor monarch: “An Act Against Taking Away of Women Against Their Will.” A stolen heiress meant lost revenues for the Crown.

“The revenue stream went back for centuries. The wardship of minor heirs of any tenant-in-chief was one of the king’s ancient feudal rights, a royal prerogative dating back to the feudal principle of seigneurial guardianship. It entitled the king to all the revenues of the deceased’s estate (excluding lands allocated to his widow as dower) until the heir reached the age of majority: twenty-one for a male, fourteen for a female. The king generally sold the wardships to the highest bidder or granted them gratis to favoured courtiers as a reward for services.

“In other words, all orphans, male and female, who were heirs to significant property became wards of the king, who then sold the wardships. Gentlemen bid for these sought-after prizes because control of a ward’s income-generating lands and their marriage was a significant source of revenue. The guardian pocketed the rents and revenues of the ward’s property until the young person came of age, at which time the guardian often married the ward to one of his own children.

This money-grabbing scheme was employed by Barbara in a novel. She says:

Sir Thomas More had two wards, Anne Cresacre and Giles Heron. He brought them up in his household where they were educated alongside his children. Eventually, Anne married More’s son John, and Giles married More’s daughter Cecily. The marriages seem to have been happy ones.

“Anne Cresacre’s story inspired me to create another ward for Sir Thomas More: Honor Larke, the heroine of my novel The Queen’s Lady. Honor grows up revering More and becomes a lady-in-waiting to Catherine of Aragon. Forced to take sides in the religious extremism of the day, Honor fights to save the church’s victims from death at the stake, bringing her into conflict with her once-beloved guardian. She enlists Richard Thornleigh, a rogue sea captain, in her missions of mercy, and eventually risks her life to try to save Sir Thomas from the wrath of the King.

In Castles, Customs, and Kings: True Tales by English Historical Fiction Authors, similarly fascinating historical facts discovered in their research are uncovered by fifty-five authors. One reviewer on Goodreads wrote, “I opened the book expecting to find something akin to a conference proceedings without ‘trained’ experts. Instead I found a new appreciation for the meticulous research and knowledge of the genre’s authors.” Another said, “I found the approach charming and reassuring.”

You can enjoy further articles by the group at the English Historical Fiction Authors blog.

Castles, Customs, and Kings is available at Amazon US, Amazon UK, and Kobo. It will soon be available at other online stores.