In mid-June I took a writers workshop, joining nine others in a two-day event led by well-known historical fiction author, Barbara Kyle. Two days of insights, lively discussion and laughter. I thought it would be interesting to illustrate some of the techniques we considered with examples from one of Barbara’s books, The Queen’s Lady.

Inciting Incident – Barbara gave us a quote from Bruce Springsteen: “You can’t start a fire without a spark.” Readers want to care about a character right away. The inciting incident shows the essence of the major character in action relating to something of vital importance to him or her. That situation throws the protagonist’s world out of balance and the story tells how that main character brings their life back into balance.

Story Hook – the hook has to reflect the major essence and central drama of the story. It sets forth a significant problem for the main character. 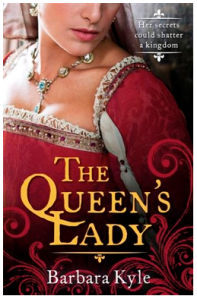 The Queen’s Lady – “She would remember this forever as the night she watched two men die, one at peace and one in terror.” Bang! The book opens. Right away we’re concerned. In a night of chaos, rioting and bloodshed, seven-year-old Honor Larke tries to find her father’s servant Ralph. Along the way she is threatened by thieves, soothes a dying man and has her first encounter with Thomas More. Then, at the bedside of her dying father, she watches a priest curse her father with “the pain of hell”. A short while later that same priest arranges for Honor to become the ward of a man she had never met, a man who will also control her father’s estate. We’re hooked!

Creating an Empathetic Character – writers need to create an emotional response for their readers as quickly as possible. This involves showing the characters conscious desires, motivations, and close relationships, placing them in high stakes circumstances, having them deal with everyday issues and ensuring the right blend of consistency and contradiction in their behaviour. According to Kyle, the more problems a character has, the more readers identify with him/her.

The Queen’s Lady – Honor Larke is the main character. Even as a young girl, she is feisty and courageous. Kyle immediately puts her in a threatening situation and then piles on the undeserved misfortune of being taken away from her home into the wardship of a man who only wants to marry her as soon as possible to his son and take over Honor’s fortune. With luck, Honor escapes that situation to become the ward of Thomas More but not without making a dangerous enemy of the priest who damned her father. Honor blossoms under More’s tutelage and ultimately earns a place at court with Queen Catherine. Justice and loyalty are critical to Honor’s character; both traits lead her into circumstances that risk betrayal and death. She desires love but pushes it away. She struggles with essential matters of faith. She is compassionate and yet tough minded.

Dialogue – dialogue reveals character and must not present any barriers between reader and characters. All dialogue has subtext. Writers can augment dialogue with thoughts and body language to enhance the meaning and perspective.

The Queen’s Lady – a scene with Queen Catherine and Honor Larke. The Queen has found some evidence to prove she was a virgin when she married Henry VIII.

“Wolsey means to strangle this evidence,” she whispered. “He means to strangle my last hope. And I must do as he says. If I do not, the Privy Council threatens the most extreme consequences for my disobedience.” She dropped her forehead onto Honor’s shoulder. “Blessed Mother of God, what am I to do!”

“Madam,” Honor said steadily. “let me go to the Emperor.”

Catherine looked up, astonishment on her face. “What are you saying?”

“Send me to Spain. In Valladolid I can pour out to your nephew your pleas to release this document from his treasury. I’ll have it back here, safe in your possession, before Ascension Day. And with it you can confound these Cardinals in their legatine court.”

“Not for a pilgrim,” Honor smiled. “Don’t you see? Easter is the perfect time for such a ruse. I’ll be a pilgrim traveling to the shrine of Santiago de Compostela — just one among hundreds of English pilgrims.”

What does this reveal about Honor? She’s brave, loyal, compassionate and intelligent. And Catherine? She’s weary, fearful and almost hopeless and yet she cares for Honor’s safety and not merely her own needs.

At the end of the course, I had thirty pages of my latest manuscript full of notes and suggestions from Barbara and the other participants. Definitely time well spent.

5 thoughts on “A Writers Workshop – led by Barbara Kyle”