A week ago, I had the distinct pleasure of interviewing Edward Rutherfurd about his latest novel, PARIS, an absorbing saga focused primarily on La Belle Epoque and the first half of the twentieth century.

Edward answered questions about PARIS as well as a few about historical fiction and his writing process.

In the reader surveys I’ve conducted, Edward Rutherfurd has been selected as one of the top historical fiction authors. Rutherfurd’s website includes all sorts of interesting information including one he calls Rules for Writing Historical Novels.

The interview below originally appeared on the Historical Novel Society website.

“Paris. City of love. City of dreams. City of splendor. City of saints and scholars. City of gaiety. Sink of iniquity. In two thousand years, Paris had seen it all.”

The opening lines of Edward Rutherfurd’s latest novel, PARIS, cast a spell that rarely let me go throughout its more than eight hundred pages. Edward Rutherfurd in person casts an equally compelling spell from the warm clasp of his welcoming handshake to the laughs we shared and the care with which he signed my copy.

Preparing for the interview, two questions circled round and round: who is this man who writes such sweeping stories and how on earth does he write them? Anyone who has read Edward Rutherfurd knows the depth of his research, the intricacies of plot, the multiple family lines he traces, and the grand unfolding of history that occurs.

We met in the Toronto offices of Random House, the room overlooking St. James park, full of pink and white blossoming trees mixed with an unfolding canopy of green. Edward wore a blue shirt. Draped on the chair beside him were a red sweater and black beret. He has a light beard, rimless glasses and bushy grey eyebrows that lifted and wrinkled expressively as we talked. At times his conversation was lively, at other times more deliberate. At all times, it was clear that he has a prodigious intellect and a ready recall of historical fact.

With the last five novels being PARIS, LONDON, NEW YORK and two set primarily in Dublin, I asked him why he focuses on cities and to my surprise he said that he regards his novels as family sagas and that these cities, along with those in RUSSKA and SARUM, are mainly happenstance. He never set out to write about cities per se, but that is “what he does and he doesn’t know how he does it”. As he writes these sagas, he tries to capture an atmosphere of place and culture and “some sort of osmosis takes place”. With a smile, Rutherfurd went on to say that this kind of story has become his trademark; his readers and publishers expect it.

Are the cities characters in their own right? Not exactly, Edward said but they are a presence and the “intention of something”. He sets out examples: Sarum is about mankind’s passion and search for eternity which people expressed in stone; London is the river of life and New York, the search for freedom.

And Paris? At first, Edward Rutherfurd said that he’s not quite sure. The city’s coat of arms features a ship on wavy water. The city’s motto “Fluctuat nec mergitur” translates as ‘she is tossed by the waves but does not sink’. He said Paris is a city that has suffered and yet goes on “with stately dignity”. Rutherfurd proceeded to talk about Paris as a meeting of the Mediterranean and the north, a city that prizes order, clarity, reason, centralism and classicism. At one point he considered “love is not eternal” as the novel’s leitmotif.

How did he choose the dramatic arc of historical events to include in Paris? “History is untidy,” Edward said. He studies the history and finds that patterns emerge and then he weaves those patterns into plotlines. A significant pattern in the history of Paris is the struggle between the city and outside powers.

Instead of straight chronology—an approach used in his other novels—Rutherfurd chose to concentrate on the Belle Epoque and the early half of the twentieth century infused with occasional flashbacks to times like 1261, 1307, 1462 and others to “thicken the plot with all sorts of secrets” and lies. He described these flashbacks as a way to tell the story without it being too long.

Edward Rutherfurd’s novels always include a host of characters from five or six families, parents and offspring down through the ages. Does he have any favorite characters in Paris? He mentioned Father Xavier Parle-Doux, a man he invented to convey the sense of the real monarchist priest and the old intense “Royalist belief that monarchs are sacred in some way”. Then he admitted to a preference for “slightly feisty women” and we both agreed that Marie Blanchard fit that description. Ultimately he told me that writers have to love their characters—all of them—in order to discover the insights that make them come alive for readers.

When I commented that Paris seems different from his other novels with more intensity to the characters and story and less focus on historical detail, he chuckled and talked about continuing to evolve his skills. He’s trying to get more “plot-driven, structured and operatic” than in the past. “The stage was my first love,” he said then mentioned that he wrote plays originally where everything has to be structured and fit within particular constraints. As he continues to write he hopes to create “more dramatic, organic wholeness” to his stories and get the architecture right.

I asked a question that I’ve asked many other writers of historical fiction: what ingredients do you think attract readers to historical fiction? This question prompted a long pause, with Edward pulling on his chin while looking off into the distance. He responded slowly, “I suppose they enjoy entering a world which is in some sense complete … a contained world”. He went on to say that readers want to discover family and cultural roots and that family sagas, the genre he writes, go back to the ancient roots of story telling that still resonate with people. The final ingredient he mentioned is the richness of history whether it is beautiful buildings, famous paintings or other wonderful artifacts.

Who inspired his writing style? James Michener was his speedy response. Michener invented this style of writing and Edward Rutherfurd has tried to learn from him while evolving his own style. “I have a style but don’t precisely know what it is.”

Does he have a brand? Rutherfurd smiled at this question. Since he writes for a living, he has to consider the market. He writes commercial novels which means he writes for an audience. He went on to say he believes that parameters or constraints imposed upon writers—such as those imposed on writers of commercial fiction—can drive creativity. I had the distinct impression that in Edward’s mind, this is a good thing.

Is he optimistic about historical fiction? Edward Rutherfurd mentioned the ebb and flow of historical fiction popularity, which he characterized as the “wonderful efficacy of boredom”. The public tires of one genre or style and seeks another. But, he was quick to say, the notion that publishing is a dying business is ridiculous. 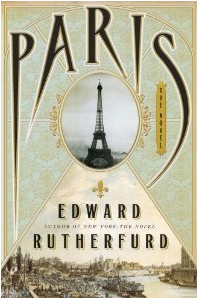 Paris : City of love. City of revolution.  This thrilling and romantic story opens in La Belle Époque, the golden, hedonistic age of peace and joie de vivre. Moving back and forth in time across centuries, the story unfolds through intimate and vivid tales of self-discovery, divided loyalty, passion, and long-kept secrets both fictional and true, set against the backdrop of the city – from the summit of Montmartre to the gothic towers of Notre Dame to the grand boulevards of Saint-Germain, from the medieval world of saints and scholars to the modern French ideals of liberté, égalité, fraternité.