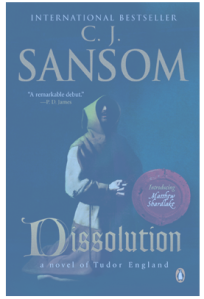 A few months ago, I developed a concept of ten essential ingredients for favourite historical fiction. Time to test another top author against those ingredients. To do so, I’ve chosen Dissolution by C.J. Sansom, the first in his series about Matthew Shardlake.

When a royal commissioner is murdered in the monastery of Scarsea, Thomas Cromwell, Henry VIII’s feared vicar general summons fellow reformer Matthew Shardlake to lead an inquiry. Shardlake and his young protege, Mark Poer, uncover evidence of sexual misconduct, embezzlement, and treason, but when two other murders are committed, they must move quickly to prevent the killer from striking again.

(1) Superb writing – Sansom’s prose is an easy blend of narrative and dialogue. Dialogue drives the action of this novel from the very beginning, while narrative situates us in time (just after the death of Henry VIII’s third wife, Jane Seymour) and circumstance (the dismantling of Catholic monasteries). Sansom’s dialogue flows smoothly. He sprinkles it with phrases of the Tudor period and references to events of the day, but rarely confuses the reader. I quickly identified with Matthew Shardlake, a man of influence who suffers the stares and jeers of others because he is a hunchback, and Mark Poer, a promising young man with a troubled past.

Once Sansom takes us to the monastery, we meet a host of main characters: Abbot Fabian, Prior Mortimus, Brothers Guy, Edwig and Gabriel, Alice who serves in the infirmary, Brother Bugge who guards the monastery entrance, Brother Jerome who was racked in the tower of London. Several minor characters  appear as the mystery unfolds. I found such a large cast of characters confusing, although perhaps that’s what Sansom intended, and they remained more like stereotypes than individuals: the brutish monk in charge, the homosexual monk, the penny-pinching bursar, the religious zealot.

In terms of pacing, Sansom weaves action and tension into the novel as we follow Sharlake’s investigation of all aspects of monastery life, uncovering facts and hints pointing at one monk or another as the murderer. There’s a murky marsh behind the monastery said to be used by smugglers, a secret passage, a young girl who purportedly ran away though some think she was murdered. We are kept waiting, as befits a murder mystery, until almost the very end to discover who did the deed and at the last moment, there’s a surprising twist.    7/10

(2) Dramatic arc of historical events – The main story takes place over a few weeks but the story behind the story – that of the dissolution of Catholic monasteries – looms in the background adding to the tension of Sansom’s story. A third plot line revolves around Shardlake’s gradual awareness of Cromwell’s willingness to destroy anyone who gets in his way. And then, of course, we have a bit of romance.  7/10

(3) Characters both heroic and human – Matthew Shardlake is both heroic and human, his side-kick, Mark Poer, provides a useful counterpoint as the young, talented assistant whose ideals lead to choices that are contrary to Shardlake’s. Matthew never falters in the quest for justice, putting himself at risk on several occasions as he peels back the mystery. We also see him as a man with desires, doubts and insecurities. Sansom shows us a dedicated man, disfigured at birth who has been rejected by many, a man of faith and loyalty who intends to do what’s right. I had the sense that he might ultimately challenge his master, Thomas Cromwell. 8/10

(4) Immersed in time and place – Sansom’s opening sentence tells us where we are: “I was down in Surrey, on business for Lord Cromwell’s office, when the summons came.” A great hook that immediately grabs our attention. A little further into the scene, we read of “heads of those executed for treason stood on their long poles, the gulls circling and pecking” and “the throng of travellers and traders, cutpurses and would-be courtiers.” We know we’re in Tudor England.

When Sansom takes us to Scarsea, the monastery comes to life as soon as Shardlake and Mark Poer enter the courtyard. And over the next few chapters we explore each aspect of the monastery – infirmary, the abbot’s splendid home, the church, the refectory, the workshops, the bursar’s office – along with Matthew and Mark. Sansom paints wonderful pictures for his readers. The only negative is that some descriptions went on too long and slowed the pacing.  8/10

(5) Corridors of power – Lord Cromwell’s power is positioned from the very first chapter and looms over every plot turn and conversation, and dominates Shardlake’s personal thoughts. We see the corruption and machinations of Cromwell, the Catholic church, the reformers, and the nobility. It’s a brutal machine at work in a time of uncertainty. I feared for Shardlake, not because of the murder he was attempting to solve but because of his growing awareness of Cromwell’s true intentions.

“Around thrones the thunder rolls,” says Shardlake at one point.

Sansom also exposes the hypocrisy of the church and monastery life where wealth is accumulated and zealously guarded against the humble beginnings and Christian intentions of the Benedictines.  9/10

(6) Authentic and educational – Sansom skillfully gives the background to dissolution of the monasteries through Shardlake’s thoughts and various conversations he has with those inside and outside the monastery. We also learn about monastery life, its management structure, restrictions, demands and eroding adherence to Benedictine values. For some reason, C.J. Sansom includes two scenes about parrots, apparently a new exotic experience for that era. I could speculate that he wants us to compare those slavishly following Thomas Cromwell to parrots but if that was the intent, he needed to connect the dots a bit more.  8/10

(7) Ageless themes – class, loyalty, the destructive power of revenge, standing up for your beliefs and for people who are powerless, the pettiness of jealousy and the notion that those driven by wealth and power are often corrupted. In addition, Sansom uses Matthew Shardlake to discuss the differences between faith and religion. Occasionally, his characters sound like they are lecturing rather than conversing. Nonetheless these are compelling themes that remain relevant today. 7/10

(8) High stakes. In the best historical fiction, characters risk life, kingdoms, epic battles, fortunes, marriage and family on a grand scale. We have Mark Poer who risks his career for a chance at happiness, the murderer who, if caught, would likely be executed, the monastery brothers whose lifestyle is threatened. High stakes, but they didn’t captivate me as much as I hoped. 6/10

(9) Sex and love. Dissolution offers little in the way of sex and love to propel the story. I found the attraction between Mark Poer and Alice, the servant girl, somewhat unrealistic.  3/10

(10) Dysfunctional families. In dissolution, the dysfunctional family is the brethren living at Scarsea. Sansom refers to them as a family in several scenes and we find out quickly how dysfunctional they are. However, to be compelling, readers have to identify with the families within a story and I doubt most readers would do so in this case. As I write this, I wonder whether readers of Sansom’s novels are mostly men, and I am presenting a female perspective. 5/10

Near the end of the story, Matthew Shardlake visits the Tower of London to ferret out a clue to the murderer. Oldknoll, the tower armourer, has this to say about England:

A country full of godless crime. Papists and mad gospellers. We should hang them all.

A great comment that sums up the times and the danger people faced every day. I thoroughly enjoyed this novel and can certainly recommend it for those who enjoy mystery with their history.