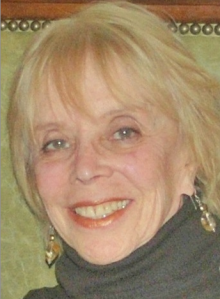 Several weeks ago I connected with Beverly Magid who has written two historical fiction novels. Like many others, Beverly has chosen the self-publishing route and I thought it might be interesting to feature a few authors who have taken that path. Here’s Beverly’s story using many of the same questions I asked the top historical fiction authors.

Why do you write historical fiction?    I don’t think I started out to write historical fiction.  But my stories develop from characters that I am drawn to.  With Sown in Tears it was something that my father said on a tape he recorded about growing up in Russia.  I had heard about the hardships the family endured, but it was specifically his description of my grandmother trying to keep him from getting sick during the influenza epidemic of 1918, when millions died.  She moved him from one relative’s house to another, hoping to stay one step ahead of the disease.  The image of her being so fiercely protective stuck with me for a long time.  I finally had to see if I could develop a story about a mother in hard times.  My protagonist is definitely not my grandmother, but I hope I did justice to her maternal qualities.

As for the first book, Flying Out of Brooklyn, it’s set in one of my favorite decades, the 1940’s.  Because of World War 2, women suddenly had opportunities to work in areas that had been the sole province of men. They were needed to take the place of the men who were off fighting and life changed in every aspect for the women.

What was the impetus to change from journalism and PR work into writing historical fiction?    The changes in my career evolved.  I lived in New York, had been an aspiring actress, which meant doing many different kinds of jobs.  But something that always interested me was writing, scribbling stories and poems as a child.  Language has a great power to affect, whether spoken or written.  One of my jobs when I was looking for acting work (and getting mainly off-off-off Broadway opportunities), was working for a weekly music/radio publication.  We’d work all night putting together record reviews, interviews, stations ratings and it gave me the first chance to do a lot of the writing.  A friend wanted me to work with her public relations firm and I elected to start an office for her in Los Angeles. In turn I was hired to start a broadcast column for a music industry magazine, which then led me to an established public relations firm where I branched out into film, theater and celebrity personalities, in addition to music.  But all the time I was still scribbling stories. At a writers workshop I met Janet Fitch (White Oleander, Paint It Black) who introduced me to other writing teachers and finally asked me to join her own private workshop, with the idea of developing a novel.  Again it was two characters I liked, from a short story which I didn’t like, that was the basis for Flying Out of Brooklyn.

Do you have a particular approach to research and writing?    I wish I could say I have a particular approach to writing.  It’s mainly getting me to sit down and not get up for several hours.  I find I can’t keep going an entire day and I envy those writers who say they do.  The research depends on what time period I’m writing about.  The 1940’s was more easily accessed through back issues of the New York Times and the Brooklyn Daily Eagle.  Information about 1905 in Russia came through the archives in the Yivo Institute in New York, plus many other books and forays onto Google. During the time I researched Brooklyn, for  Flying Out of Brooklyn, I did find a neighborhood in Williamsburg which looked exactly as I imagined the neighborhood in my novel. For Sown in Tears, I also traveled to Russia and the Ukraine, which took me to the areas of earlier shtetls (towns or villages), where the Jewish communities were forced to live. I spoke to some of the surviving residents whose families once came from those areas. But again, once I gathered the information, I had to absorb it and let it go, writing mostly from my imagination.

Have other writers influenced you and, if so, how have they influenced you?    My influences don’t just come from historical writers, but good writers of any genre.  But some writers I treasure include, to mention just a few, Hilary Mantel (Wolf Hall), Markus Zusak (The Book Thief), Irene Nemirovsky (Suite Francaise), Tolstoy, Edna O’Brien (everything she wrote), the aforementioned Janet Fitch, the plays of Tennessee Williams, Arthur Miller, the stories of Alice Monroe.  They all have the gift of language, setting a scene so you can almost smell the air, feel the temperature, taste the food on the table, involving all the senses of the reader.

How do you select new stories to tell? Do you think of yourself as having a brand?    I know in today’s world, branding yourself and your writing is a major marketing ploy, but in general I think of myself as being eclectic and not easily pinned down.  However, the issues of women, of any era or age, get a big priority in my writing.  Although both heroines happen to be Jewish, I think of their story as being universal and relevant to women everywhere.  And I hope that the problems that my male characters face are ones that men will recognize no matter who they are.

What techniques do you employ to write productively?    As for my productive writing techniques, they amount to recommitting myself to the story and not allowing myself to get bogged down with emails, twitters, Facebook or re-runs of Law & Order until I’ve finished that day’s work and it’s dark outside.  I won’t tell you how often I actually succeed.

Can you tell us a little about taking a self-publishing path?    I finally chose to go with self-publishing because this approach is no longer stigmatized even by traditional publishers.  After taking as long as I do with the writing of the book, I found myself too impatient to wait for agents and publishers to make up their minds.  Many praised the writing but were looking for that next big blockbuster.  It’s amusing to realize that the latest blockbuster, Fifty Shades of Gray, was actually self-published first.

For Sown in Tears, I am working with a firm to help me navigate the social media/internet channels and of course I’m reaching out to previous readers, libraries, religious groups and women’s organizations.  Speaking to groups, doing book signings, answering fans’ emails, blogging, all helps to connect you to your readers.  And I love it.  It’s always amazing how differently people see your work and relate to it.  I learn from all of the exchanges.

What strategies guide your writing career?    The only strategy I have for writing is attempting to train myself to be more disciplined and to be as observant of the world and people around me as I can.  Listen, look, learn.

What would you do differently if you were starting again?    The only thing I might change if I were starting again, is to start writing novels much earlier in life.  I am awestruck by the number of books some writers have been able to produce in their lifetime.  But then I might have missed out on some of the adventures and experiences that I have had, which resulted in who I am and what I write.

Beverly’s latest novel is Sown in Tears. “Russia, 1905 — A night of terror for the Jews of the village of Koritz, in the Pale of the Settlement of Russia, leaving Leah Peretz to survive alone with her two young children.”