During WWI, official war diaries were a matter of standard practice, recording day by day  the events that occupied millions of men. The following post originally occurred in One Writer’s Voice.

As I was writing Unravelled, I spent a lot of time on the internet, trolling websites and googling with a wide range of search criteria. Much of my focus was WWI as well as Vimy Ridge and, not surprisingly, the Hong Kong libraries had little information to offer so the internet as well as a few books were my primary sources.

One day, to great delight, I discovered a Canadian website devoted to military diaries. My government had carefully created images for every daily diary entry kept at the division and corps level throughout the war. I felt like an archeologist discovering a new dig or a pirate finding buried treasure.

Since my protagonist, Edward Jamieson, was in the Signal Corps, I found a series of diary entries for Canadian Corps Signal Company then spent hours and hours reading diary entries to add contextual detail to my novel. These diaries inspired me to give Edward the role of recording secretary, incorporting a number of verbatim entries to add information about the role of signals in what I hope is a more natural fashion.

The world of soldiering comes alive in daily entries itemizing the tedium and terror of living on the front lines. 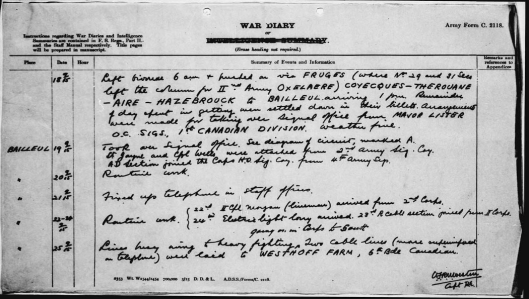